HL - a story of success! 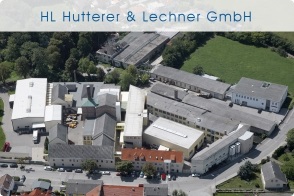 In 1950 two ambitious young men - Leopold Hutterer and Viktor Lechner - founded a new company for the purpose of gaining a foothold in the lead business. Their technical and commercial qualifications allowed them to build up an enterprise which was able to meet the demands of such complex branches of trade like the chemical industry and wastage installations.
From humble beginnings the two men were soon able to build a little shed. A few years later they purchased a bigger factory building, which is still the company’s location now. With hard work and judiciousness the business was slowly extended.
Through the years it turned out that the branch of plumbing had the tendency to use more and more plastic instead of lead. This change was realized in time and within a few years the production was systematically switched over from lead to plastic. Choosing this way was hard but successful. Today not only the Austrian market is being served with plastic products, more than half of the goods are being exported. In 1993, the neighbouring area of 6.000 m2 could be acquired to grant further expansion.
The partner Leopold Hutterer died in 1982. Representing the heirs, his daughter, Mrs. Christiana Schütz-Hutterer, joined the company as a managing partner and managed the businesss together with Viktor Lechner until his death in 1998. Since then Mrs. Schütz-Hutterer has been leading the company on her own supported by an experienced team of excellent technicians. In the year 2001 the company has been reorganized and now operates under

Continuous development of new products and intensive contact to the wholesalers and plumbers made it possible to build up an excellent reputation throughout and outside Europe.
These days the factory is proud of having very modern and highly competitive production facilities on an area of 10.000 square meters. That also comprises a shop for the independent construction of injection molds and tools. The company employs about 100 people.
In 1990 the first information bureau in the Eastern European countries was founded in Budapest and rapidly others succeeded. Today HL is represented in Brno, Bratislava, Maribor, Milan, Warsaw, Sofia and Moscow. The markets of Western Europe are served from Germany. The innovative high-quality HL-products and the intense market support are the basis of an actual 60% exporting quota. In 1995 the company was awarded the quality certificate ISO 9001. Product innovation, quality and reliability as well as the effort to meet the customers´ demands promptly are the highest goals of HL.

This site uses Google Analytics. These cookies may track things such as how long you spend on the site and the pages that you visit so we can continue to produce engaging content.